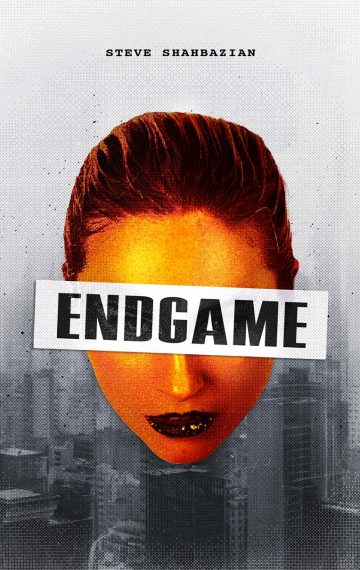 In a decaying 23rd century, religion is big business and tech is the new salvation

With Faithcorp’s spiritual simulations leading to widespread addiction and what’s left of law enforcement being administered by contract killers, it seems the Earth’s days are numbered. However, when three Faithcorp execs are found murdered, Licensed Operative Cynthia Hemlock makes it her mission to uncover the truth. Could this be the work of the mysterious Godhead and his underground Godly Resistance Army?

Unfortunately, as the Apocalypse approaches, Cynthia finds there is more at stake than money, and it’s no longer clear who her friends are – or what she is investigating. Is Faithcorp’s new religitech the work of the Devil or are its opponents spiritual Luddites hell-bent on destroying the world? And what has happened to its founder, the enigmatic Julia Greengage?

With the End Times approaching, Cynthia discovers she is not the only one facing their own personal Armageddon.

Well, hellooooooo there Mr Steve and all of you in the 21st century.

I understand you’re a Licensed Operative. What does that entail?

Here, in the 23rd century, us Licensed Operatives maintain law and order—or whatever passes for it. We’re contract killers, working for the state and paid to shoot the bad guys—if you believe what they tell you. Typical day, we get our case from our Case Office, then we’re out whacking punks while punks try to whack us.

Sounds pretty dicey. Could you tell us a bit about your latest adventure?

Huh, you make it all sound so—what is it you limeys call it?—“posh.” I was investigating these three execs who’d gotten themselves whacked, only the Case Office didn’t want me looking that way. They threw me some small-fry case to keep me quiet, but I knew something big was up and I knew the dumb [EXPLETIVE DELETED] wouldn’t solve [EXPLETIVE DELETED], so it kind of became a private investigation, if you know what I mean.

Please, Miss Hemlock! This is a family-friendly website! What do you mean?

I mean, Mr Steve, that these three execs had “Trads” written all over their corpses.

Trads? Could you elaborate?

Sure. The Trads are the combined forces of the world’s traditional religions. I heard that, way back in the old, old days, these guys used to fight each other. Not today. No sir. Today, they’re united and want to bash the… err, stuffing out of… you know, the only power that counts for anything in this world.

Hah! You haven’t heard of Faithcorp? I guess things were very different back in your day. It’s like one of your big, bad corporations, only much bigger and much *much* badder. It produces this godbox device, which has got the Trads all heated. It simulates religious experiences so convincing that folk become addicted and lose all grasp of reality.

A kind of Virtual Reality?

Who knows? Some say there ain’t nothing virtual about it—seems as real as the world right around you. More real—you can’t tell what’s real and what’s illusory. It gets so bad you don’t know your face from your feet.

Sounds incredible. How does this “godbox” work?

Hey! I ain’t no technician! And don’t get me started on those two Faithcorp “Managers” who were supposed to explain it to me!

If you didn’t know how the godbox works, how did you tell apart reality from illusion?

Hah! You think I’m gonna tell you that and ruin it for your readers? Man, you’re worse than the penpushers at City Hall! All I’m gonna say is that smarts ain’t enough. When it comes to these “int-o-lect-u-al” cases, as my boss Jarcel calls them, you gotta look beyond the thing itself—you gotta understand its meaning, you gotta understand the philosophy. Most L.O.’s don’t got it.

You, on the other hand, do. What’s the worst thing you’ve come up against?

Well, if it’s the most gruesome thing, then it’s definitely the—

Okay, okay, perhaps that wasn’t the best question. Start again. What was the most hair-raising moment in your life?

“Hair-raising?” You make me laugh! Definitely, the moment I got caught up in a Trad procession when it turned into a mob. Man, I didn’t think I was gonna make it out alive. Even today, that one makes my flesh creep.

Well now, sweetie, I guess you’re gonna have to read the book….