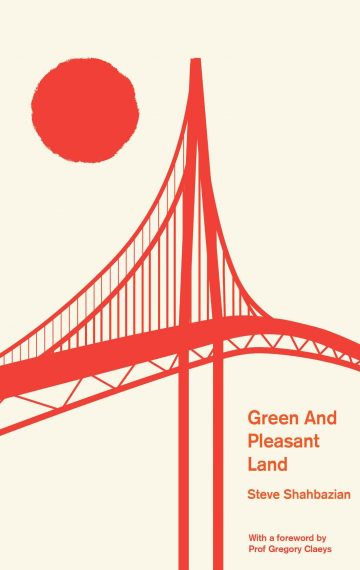 State failure. Social apocalypse. England is on the edge

In an England of the future, a booming economy masks rising violence. Controversial Chief Executive, Roger Tyson, warns the country is on the verge of collapse, but his aggressive populism proves divisive. Friends say he wants to save his country, while opponents accuse him of seeking to become dictator.

Confronted by a disintegrating society, he finds himself drawn ever deeper in search for the scandal he believes will bring down the government. Is it secretly aiding the violent militants planning to destroy society? Is he covertly working with hardliners in the military to impose martial law? Claims of truth meet allegations of lies – and all the time the country hurtles towards a catastrophic meltdown.

With truth and disinformation blurring into one, is his country beyond saving?

A journey into the dark heart of power, Green and Pleasant Land is a dystopia for the 21st century.

An Interview with the Author

What Inspired you to write Green and Pleasant Land?

I read George Orwell’s Nineteen Eighty-Four and Aldous Huxley’s Brave New World as a teenager and had always wanted to write my own dystopian novel.

Dystopian fiction has become all the rage. How does your novel relate to today?

As little as possible, I hope! The totalitarian state and regimented society of much dystopian fiction felt very 1930s or 1940s, whereas the opposite – a weak government and a fragmented society – felt much more current. After the 2008 financial crisis, I wondered: could a first world country become a failed state?

You describe it as a “journey to the centre of power,” why?

Nineteen Eighty-Four only shows the reader as much as Winston Smith is allowed to see, but I always wanted to know what went on within the Inner Party. What power struggles emerge at the apex of power, we are left to imagine. I wanted to get right to the heart of dystopia and see what sort of people might hold power.

Dystopian novels naturally gravitate to a worm’s-eye view of the world, but I wanted to see what a dystopia would look like from the perspective of the alpha character – Nineteen Eighty-Four as seen by O’Brien or Brave New World by Mustapha Mond. The story of my dystopia is seen through the eyes of controversial industrialist turned politician, Roger Tyson.

You say controversial, is he good or bad?

Now that’s not for me to say! The England of Green and Pleasant Land may be seen from his point of view, but it is up to us, the reader, to form their own opinion. I have deliberately written the novel, so that both Roger’s and his opponents’ viewpoints are presented as a debate. Just as in real life, we are presented with claims and allegations, with facts hard to come by.

I got the idea for Green and Pleasant Land as far back as 2001 after watching a documentary about the Japanese financial crisis called Bubble Trouble. Giant keiretsu, an iron triangle of party, state and industry, the Ministry of Trade and Industry directing Japanese business in the national interest; so many of the things we had been taught about Japan in the 1980s had turned out to be wrong. I was also fascinated by the idea that Japan had deliberately absorbed Western culture and made it its own from the 1860s onwards, I tried to imagine the process in reverse.

And finally, what are you working on next?

I will be publishing a set of short stories about various forms of failed utopia.