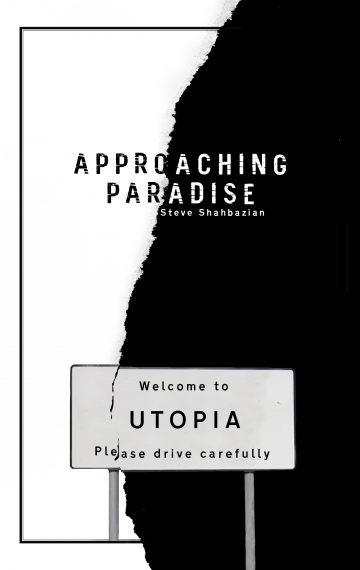 Wouldn’t it be lovely to live in paradise? Perhaps… but doesn’t everything come at a price? Approaching Paradise presents seven stories where utopia doesn’t turn out quite as expected. Perfection might be unique, but imperfection turns out horrible in many different ways….

Living in a world where hedonism is god and happiness measured in Layards, weedy loser Geoffrey Small is bullied by his mates and desperate to be loved. Finding himself bottom of the heap again, he turns to company Persona, run by the sinister Dr Magnus Rajan, which transplants the customer’s brain into artificial bodies, designed and grown to specification. With the University Bacchanal fast approaching, Geoffrey looks forward to showing off his handsome new body, but in the process has he created a monster?

A Garland of Roses

James Maxwell and Abigail Bassidge have always dreamed of doing good. After hearing about Camp Sunshine, they put aside their wedding plans to create a world without greed, where people are motivated by altruism and money consigned to the history books. However, once signed up, they find that charity doesn’t necessarily begin with digging wells and building schools.

Magnificent but not War

Thanks to modern science, illness and ageing are things of the past and people can live into their hundreds in the same physical condition they enjoyed in their youth. For Malcolm Dewbury, this brings little joy. Despite having done everything he has ever wanted to, he has found no meaning to his life. When a military recruiting parade passes by, he realises his error. Finding a place among his new friends, his life is changed, but serving his country turns out not to be quite what he imagined.

Welcome to Graham World, the futuristic theme park with a difference. Mates Paulos, Daz, Alex and Tommo take a break from their humdrum lives in investment finance to find themselves playing in a real-life computer game. Shooting robots for fun and relaxing in the pleasure zone, it’s the best holiday they’ve ever had. However, they haven’t found out what the difference is.

A thought-disordered stream of consciousness, is the nameless narrator the victim of a tyrannical government or an escaped patient experiencing a paranoid psychotic episode?

The Usotope is a psychedelic drug that produces shared collective hallucinations and good job, too. The world’s problems dissolved into nothing as people live out their dreams together. For lion tamer and sandwich connoisseur, Matlock Baines, this provides only partial satisfaction, as he finds himself laughed at for being so gauche. Will the words of philosopher Bexine Rutterfink provide the answer? He will have to hurry, as friend “Prof” Harry Bergstrom has warned: the world is running out of Usotope.

Green and Pleasant Land A Century of Dystopia Futility