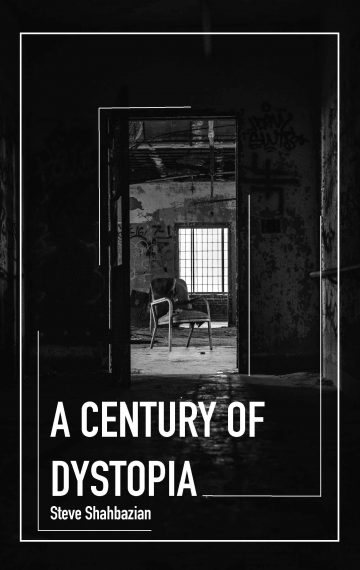 In A Century of Dystopia, author Steve Shahbazian looks at seven literary dystopian novels: We by Yevgeny Zamyatin; Brave New World by Aldous Huxley; Nineteen Eighty-Four by George Orwell; A Clockwork Orange by Anthony Burgess; High Rise by J.G. Ballard, The Handmaid’s Tale by Margaret Atwood and his own Green and Pleasant Land.

In this work, he analyses the ways in which the authors used dystopia to comment on their world. Through study of the authors’ own essays, interviews, letters and the historical context in which the novels were written, A Century of Dystopia analyses the allusions, metaphors and references within the works to answer the question: what messages were the authors trying to convey?

Discussing ideas ranging from psychology, sociobiology, utilitarianism, solipsism, Christianity, Freudianism and thermodynamics, A Century of Dystopia finds out how the authors of these iconic dystopias influenced each other and asks us to look at the works again. While many themes from the novels have been discussed at length, many more have been missed or overlooked. Reading these works closely reveals the authors’ responses into the great events of the 20th and 21st centuries and that their insights into life go much deeper than we realise.

The history of fiction is a history of the human imagination. Read these essays and find out what did the fictional worlds tell us about the real one.

In the introduction, Steve Shahbazian introduces the concept of dystopia and its relation to utopia, the basic premise of speculative fiction and the different dystopias depicted in the seven novels discussed in the succeeding essays. Although each one involves some form of civilisational “decline and fall,” the introduction finds there is no one prototypic dystopia: dystopia is the story of where we fear we might be headed.

We by Yevgeny Zamyatin

Written after the Russian Revolution, Yevgeny Zamyatin’s seminal dystopia depicts a world far in the future, so regimented that people have numbers instead of names. We famously provided the inspiration for Nineteen Eighty-Four and all too often is judged in terms of Orwell’s more famous work. Once judged on its own merits, We emerges as an fascinating story in its own right.

In Zamyatin’s work, dystopia is a passionless mathematically rational paradise. Emerging out of the devastation of large-scale warfare almost a thousand years ago, One State faces its own apocalypse. For citizens, only two outcomes are possible: the perfection of paradise or continued life. Who is it standing in the way of death? The much-reviled heretic.

Combining political, mathematical and thermodynamical themes, Zamyatin weaves a series of Biblical allusions – starting in a technological Garden of Eden and ending in a cosmic Armageddon – into a fable discussing his favourite themes of energy, entropy and revolution. Zamyatin’s fable is not merely a story about tyranny or revolution, it is a story about life and death.

The inspiration for Nineteen Eighty-Four and prefiguring Brave New World, We provides the germ for the 20th century dystopia.

Set five hundred years in the future, Aldous Huxley’s Brave New World presents a series of contrasts: a world unlike our own that is also similar, a utopia that is a dystopia, a regimented yet licentious society, a funny yet serious story. The story of individual rebelling against group conformity or the story of asceticism versus hedonism; a satire on 1920s consumerism or a warning about engineering humanity? The meaning of Huxley’s work has proved ambiguous.

In Brave New World, dystopia is a superficial consumer heaven of standardised humans governed in the name of stability. Emerging out of destructive worldwide conflict, Huxley’s World State has discovered that consumerism, leisure, recreational drugs constitute the most effective means of authoritarian rule – all of which are underpinned by the application of mass production to human reproduction.

Taking a satirical look at bio-engineering, social convention, religious ceremony, utilitarianism and hedonism, Huxley shows the blurred lines between utopia and dystopia. Would we want utopian happiness, if it were forced upon us? Would we want this enjoyment, if denied our freedom? Would we want this stability, if never given the chance to be ourselves?

Brave New World provides a breakneck ride through a utopia that is also a dystopia; a work that is satire, prophecy and warning all at once.

Written in the shadow of World War Two, George Orwell’s bleak vision of the future is perhaps the most iconic dystopia; a nightmare world where totalitarianism is taken to its logical conclusion. Against Oceania’s all-powerful one-party state, the lone rebellion of Outer Party functionary, Winston Smith, barely disrupts the flow of repression, leaving a pessimistic ending that seems to deny even the possibility of hope.

In Orwell’s work, dystopia is a regimented Stalinist tyranny lacking even freedom to think, but this is not, an imported tyranny – it is a home-grown, forcing us to look within to find totalitarianism’s roots. Orwell’s dystopia is much more than a prophecy of a surveillance society; it is a description of what happens when power reaches its apogee and rulers decree what constitutes reality.

Building on the earlier dystopian works and arguing against contemporary political philosophy, Orwell argued there could be no escape from a truly totalitarian rule, not even within the privacy of one’s mind. Inventing the philosophy of collective solipsism, Orwell anticipated the mind control techniques described by later social psychologists. Not only is “Big Brother is watching you,” he is controlling how you think.

Despite its unremitting bleakness, Nineteen Eighty-Four has retained its power down the decades. The true nature of totalitarianism is far uglier than we could ever imagine.

A Clockwork Orange by Anthony Burgess

Often seen through the prism of the film, Anthony Burgess’s dystopia is more than a graphic tale of youth ultra-violence. As the pendulum swings between youth violence and police state, individual free will is easily forgotten.

Written fourteen years after Orwell’s Nineteen Eighty-Four, A Clockwork Orange presents a democratic dystopia. In place of totalitarianism is a world where the state is weak and youth rampage out of control. Consumerism, leisure and pop culture; citizens are terrorised by teenagers rather than the secret police, yet Burgess’s vision is far from a failed state.

Weak though Burgess’s state may be, it still possesses extensive powers, including the frightening Ludovico Technique: a Room 101-like Pavlovian conditioning programme, which compels criminals into compliance by inducing a paralysing nausea whenever they feel the urge to commit crime. With both political parties willing to sacrifice individual free will for their political goals, there appears to be little hope.

Written in response to the work of behaviourist psychologist B.F. Skinner, Burgess uses language, conditioning and subliminal messages to convey the subtle manipulations by which rulers subvert free choice. Accept human nature in all its imperfections; trying to perfect it into something it isn’t only creates monsters.

Beneath the violence, A Clockwork Orange is a story of good, evil and human nature; an illustration of the tightrope democracy is forced to walk: sacrifice human free will for political expediency and the road to totalitarianism is open.

Set in an East London tower block, High Rise is a collective descent into barbarism. 2,000 well-to-do residents shed their civilised inhibitions as conventional social order breaks down and embrace their transformed world in a Freudian journey.

In Ballard’s work, dystopia is a psychopathic rebellion against a sterile urban environment, in which technology is both liberator and oppressor. People are freed from the need to look after themselves and reduced into dependency. With no possibility of escape, residents are forced to come to terms with their transformed world or die.

Combining the recreational consumerism of Brave New World and the violent self-expression of A Clockwork Orange, High Rise is a modern fable. The private fantasies of the mind have been turned outwards into the physical landscape, while the landscape of social life has penetrated inwards into the human psyche, resulting in a descent into barbarism. This, however, is not a regression to a primitive state; it a new atavism – the atavism of an urban, technological, media-savvy society.

Through extreme and unpleasant metaphors, High Rise provides an uncomfortable commentary on the aggression that hides behind polite social conventions.

The Handmaid’s Tale by Margaret Atwood

Perhaps the most famous dystopia of recent times, The Handmaid’s Tale provides a female perspective: what Nineteen Eighty-Four might have looked from Julia’s perspective or Brave New World from Lenina Crowne’s. Set in a post-revolutionary United States – now known as the Republic of Gilead – birth rates have collapsed and the new elite does not intend to let women slip out of its control. Reproduction is too important to squander on freedom.

In Atwood’s work, dystopia is an authoritarian state disguised as a Godly society. Gilead, however, is not simply a quaint religious community. Behind the seemingly archaic puritanical society lies a quasi-fascistic power structure, using a selection of Biblical injunctions and modern biological thought to justify their rule.

Within the story, there are questions. Who is the protagonist, Offred? What does her elusive narrative tell us? What hierarchies exist within the ruling power structure? The answers are not as straightforward as they might seem and, lurking beneath them, the methods by which people seize power, manufacturing support and excluding those they seek to suppress. Computerisation might not seem the most obvious theme, yet it provides a hidden thread running through the story.

Strong though Gilead’s rule may be, it will crumble eventually. Offred’s story might leave us with questions, but her world tells us something else: power is only ever fleeting.

Influenced by the famous political dystopian novels of the 20th century, author Steve Shahbazian provides a commentary on the themes within his own Green and Pleasant Land. In this analysis, the author responds to his own work, showing how propaganda, disinformation and thought control runs throughout his fictional world.

In Green and Pleasant Land, dystopia is a surge of violent atavism society is powerless to resist. Set in an England of the future, a weak government and a fragmented society prove unable to contain rising violence. Could a first world country become a failed state?

The last volume in A Century of Dystopia, the author reviews his own work, describing how he has constructed a dystopian world, exaggerating reality to create a “real life on steroids” effect, and how his fictional world relates to the real one.

In a world where propaganda and disinformation are the common currency of debate, can the truth ever be known? The answer is both yes and no.